Celebrating the harvest in the Southside of Glasgow

Queen’s Drive Lane community garden
This was a derelict space until South Seeds leased it from the property developer whose plans have stalled. 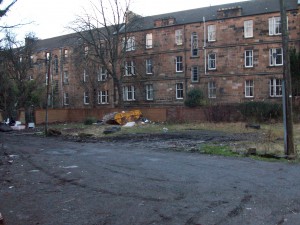 It is nearly the size of a football pitch and is hidden down a lane behind tenement buildings in the desirable Queen’s Park area. Local residents came out on regular workdays to clear litter, install raised beds and fill them with compost. Over time as the space was used more and more, anti social behaviour reduced.
Residents decided what they wanted to grow and planted up the raised beds with the guidance of South Seeds’ Robin Ashton. The space took on a whole new feeling, it transformed from derelict land to a flourishing garden as the growing season progressed. Local residents from surrounding tenements took part in regular Tuesday evening sessions and over time got to know more about each other and gain experience in food growing. 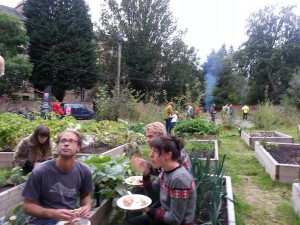 Over 60 residents came to the barbecue to celebrate the harvest. Most of the food consumed had been harvested that morning from the garden. Other activities such as Dr Bike were available and residents who hadn’t yet received an energy audit from South Seeds took the opportunity to sign up.

Allison Street community garden
This garden was built in record time by the hard working children of Slovakian and Romanian families who live in rented tenement flats over looking the space on Westmoreland Street and Dixon Avenue. The garden, is a fenced off oasis of greenery, next to a lane which is constantly blighted by flytipping and littering. South Seeds ran sessions every Wednesday evening during the summer to build, plant and tend the garden with the children. The regular sessions have given South 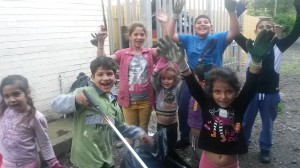 Seeds the opportunity to monitor the build up of rubbish. The rubbish blights the area and bags left sitting get torn open by vermin and the contents are windblown. Before each session South Seeds provide litter pickers and gloves so the children can clear the rubbish in an effort to contain the problem and stop it spilling over in the garden. It’s not unusual for over 10 black bags of rubbish to be collected by the children before each session.
The children have loved planting seeds and seedlings and watching them grow. The garden has produced potatoes, kale, courgettes, peas, leeks and strawberries. The children, who range between 4 and 14, have gleefully taken home produce to their parents. While there can be mistrust between local families, the children have an opportunity to work together and explore differences and similarities in the garden space. 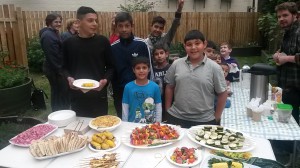 To celebrate the children’s hard work and the abundant harvest, South Seeds held a barbecue with salads made from vegetables harvested in the garden. The children have encouraged their parents to visit the garden to see what they had achieved. A number of parents have also received energy audits from South Seeds.

South Seeds are delighted that local residents have made the most of the community gardening opportunities developed this year. The growing season is drawing to a close as the light fades in the evenings. Our gardening sessions will end in early October. There is not that much to do over the winter apart from a little maintenance to prepare for next year. We hope the connections residents have made this summer will bring further opportunities in to their lives.

The legacy of Agnew Lane

Shortlisted for the Nature of Scotland Award

Music and BBQ at the Croft