Saving energy in a sandstone tenement

Mrs Abubakar contacted South Seeds after we gave a presentation to the parent council of her children’s school.

The Abubakars live with their three primary-age children in a rented sandstone tenement flat and asked South Seeds for a home energy audit – despite describing their consumption as “conservative”.

However, after our energy officer’s visit they were shocked to discover how much power they were using in certain areas of the home.

The family have now had their flat draughtproofed, significantly cut their energy use, and begun using the local composting facilities installed by South Seeds at Govanhill Community Baths Trust.

“Working with South Seeds has been important for my family,” said Mrs Abubakar. “We would not have been in a position to make the changes without support, and their energy report was easy to understand. 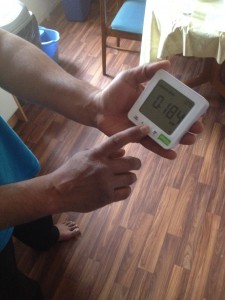 “After borrowing an electricity monitor from South Seeds, we were shocked at how much electricity we were using – especially when having showers.

“Now the whole family has significantly cut the time we spend using the shower, and the children gently tease one another if they forget to turn off lights or leave things on standby.

“The children’s bedroom is much warmer since we got draughtproofing fitted, and we can use the space much more flexibly. Before, we had to have their beds right next to the heater and as far away from the windows as possible. We’ve also draughtproofed the front door, fitted thermally lined curtains and changed to using LED lights to cut costs.”

The Abubakars’ home energy report also recommended using a powerdown switch and checking whether their electricity tariff was the best available.

The family are all keen to keep reducing their costs and usage, including fitting LEDs throughout the house, and urge other households to contact South Seeds.

Mrs Abubakar said: “Taking advice can change and help the world. The best thing is just to start taking that action.”

Are you eligible for the Warm Home Discount?

Vote for us to win the People’s Choice Awards