On behalf of South Seeds, we are very sorry to announce that our community garden site at Agnew Lane has been demolished. This is a real blow to everyone who has been involved with the project over the years.

Agnew Lane Community Garden was one of the very first projects undertaken by South Seeds, back when we were a small community organisation, with no funding and very few resources. From the very beginning, we were aware that the site was owned by a developer and that planning permission was in place; however the land had lain vacant for many years and was a target for fly-tipping, drug abuse and other antisocial behaviour.

At this early stage, we made repeated attempts to contact the landowners; we wrote emails, left telephone messages with their receptionist/assistant and sent recorded letters, asking for permission to use the site on a temporary basis. No response was ever received.

We also had discussions with the local authority and can confirm that they did not provide public funding for any of our works on the site. However, the council did provide us with valuable assistance in clearing up the area.

Following the clean-up, and with the support of local residents, we decided to install temporary measures to provide community growing space, in the hope that this would combat the problems associated with the site and improve it in the short term – always with the clear intention that any such measures could be removed at short notice and installed elsewhere when the landowners decided to proceed with development. We made a concerted effort to make clear to people who came along to volunteer that our activities on the site could be terminated at any time.

We had always hoped that, given our repeated efforts to engage with the landowner, when such time came they would be prepared to engage with us, and allow us to plan an orderly move from the site. However, due to the nature of our work there, this could never be guaranteed, and we must reluctantly accept that the landowners were within their rights to reclaim the space. We were still shocked and disappointed that no such attempts were made to engage with us, and that the site was destroyed without notice and without consultation.

We are particularly upset as we had also been in talks with another local landowner with regard to signing an agreement to use another space very near to the Agnew Lane site, which could have provided a great home for the raised beds, plants and trees that our volunteers have worked so hard to cultivate. Recently we had been made aware that the existing planning permission for the site had been due to expire, and that the Agnew Lane landowners had re-submitted their application. This had not yet been granted, but looked likely to go through, and so we had been in the process of trying to establish contact with them once again to negotiate the transition; however, action was taken before any discussion could take place. If any attempt had been made by the landowners to discuss the site with us, we now have the funds and resources (raised by our volunteers as opposed to grant funding) to have moved to the new site within a very short space of time. We must stress that no communication, written or otherwise, has been received – either at the operational office of the charity in Butterbiggins Road, or at the charity’s registered office with our solicitor.

However, whilst we are incredibly disappointed by the recent developments, we are not disheartened. In fact, we managed to speak to the contractors while they were in the process of dismantling the site, and they were sympathetic to our situation and have assisted us in salvaging what remained of the raised beds and timber, and even some fruit trees, and have put these to one side so that, hopefully, all will not be lost. We will be attempting to co-ordinate efforts to reinstall what we can in the near future at an alternative site/s.

Agnew lane before and after shows the transformation we achieved from derelict land to temporary community garden. We will always be proud of what was achieved at Agnew Lane. We have great memories of the events we held there, from our successful sculpture workshop to our recent Halloween Spooktacular, which was very well attended and highlighted the potential of our community growing spaces to be enjoyed by all. We were immensely proud of feedback from local residents regarding the reduction in antisocial behaviour and overall improvement of the site.

We hope that the landowner’s recent actions show a new commitment to looking after what had been a very neglected and poorly maintained space; we certainly have no wish to see it revert to its former state, which we know is a concern for many local residents.

Thanks once again to everyone who volunteered and enjoyed the space – and for those of you who are interested in further work with us, please keep your eyes peeled for further opportunities coming up soon. 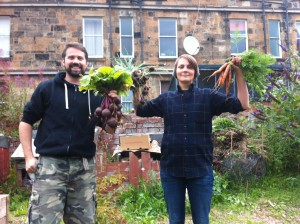 Calls for unity in Govanill over ‘rubbish rage’